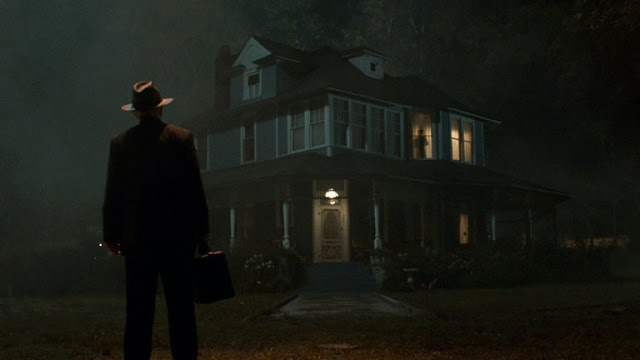 I do believe that recent horror movies have a thing for The Doors and Blondie. Might be the mood and the lyrics and all that jazz but I couldn't turn a blind eye when Conjuring 3 hit on a familiar territory, music wise...well, this movie conjured many familiar flashbacks and cinematic nods.
Does this photo ring a bell? The Exorcist vibes are strong in that scene to the point, one could almost hear the Tubular Bells theme and cringe.
You revisit the land of Pazuzu when the demon attacking Arne crawls in the familiar spider backwards crawl that sent chills many years ago.
Back on the music wagon, "Call me" by Blondie, began its cinematic career with "America Gigolo" and from that moment on, it became a staple in movies and TV shows  - I'm still a fan of the montage from "Bride of Chuckie" - in Conjuring 3, "Call me" feels as ominous as "Break on Through (The Other Side)" by The Doors in "Deliver Us From Evil". I always that the devil and his minions have excellent music taste - Lucifer, season 5B re-affirmed my belief but that's another fascinating subject. 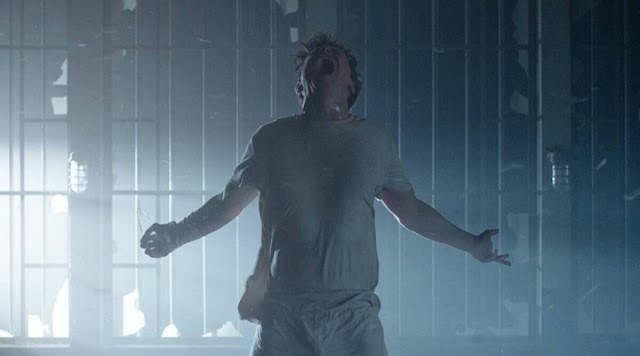 This new chapter in the saga of the Warren family has a melancholic vibe.
The duo is older, wiser, prone and closer to death.
We've been with them from the early '70s and now we're in the cinematic world of the early '80s and hopefully, maybe we might get something of a closing chapter set in the late '80s or the early '90s - one can hope.
The Conjuring  didn't deliver on the depth and profound character introspection of The Haunting of Hill House but it created a cinematic universe out of basically nothing (and when no one believed it would become an universe of meshed movies).
You remember that ever since Marvel hit gold with intertwining their movies and create an universe, everyone tried to do that. The Dark Universe of monster failed, DCEU had and still has growing pains, yet James Wan put together an universe based on the cases the Warrens had and gave us a familiar take on the X-Files, except both protagonists believe in the supernatural and maybe there aren't some secret government organizations who try to cover everything ( although, in "The Nun" we get the feeling the Vatican is aware of the some of the deeper ramifications of some of the demons).
Older, wiser, the Warrens do what they do best with Miss Warren feeling a bit more in control than she was in the first installments.
We don't get the haunting house of the decade but we get something familiar, well you're familiar with Blair Witch at some point. The villain is an occultist and yes, the way the truth unfolds looses charm and energy to the point you can mutter "yeah, yeah, figures".  The occultist doesn't even tries to make herself interesting. I mean, give me Annabelle, give me Valak, give something I can cheer and loathe. This simple feels....empty.
Again, the red thread uniting all the chapter of the Conjuring is the deep and profound love between Ed and Lorraine and Patrick Wilson and Vera Farmiga know by now the tune and play it to perfection.
What feel more interesting is the mortality, a sensible subject, delegated in the backgrounds but ever so present. We know Ed died first and with this new episode, we feel like it gets closer and closer (yes, Ed Warren died in 2006 there is still time even in this cinematic universe) but it feels more and more present.
The Conjuring 3 feels simply as another episode from the Warren's sage. Personally, I wait for more on the adventures of Valak and Annabelle or a return to the charming terror of the first installment.
Email Post
Labels: movie review movie reviews patrick wilson the conjuring the conjuring the devil made me do it the conjuring universe the warrens vera farmiga